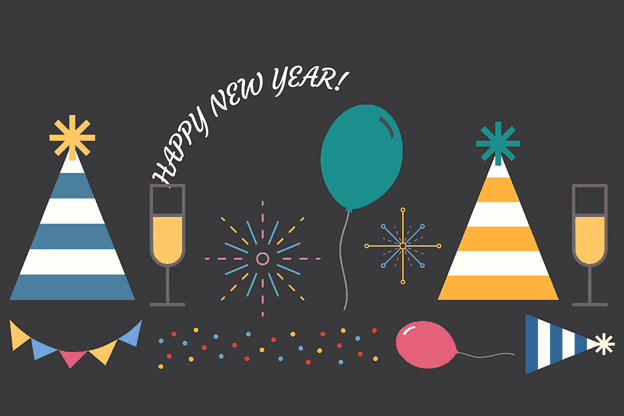 Since ancient times, the New Year has marked a time of fresh starts. Much of what we celebrate in today’s New Year’s holiday stems from ancient tradition, but the holiday has also evolved to encompass modern culture.

For over four thousand years, civilizations around the world have celebrated the New Year. Today we might recognize the New Year as a day off from work spent watching fireworks and sipping champagne, but there is so much more to the New Year than that!

The first New Year’s celebrations took place nearly four thousand years ago in ancient Babylonia. It occurred during the Spring Equinox when the world experienced equal parts of darkness and sunlight.

During the equinox, the people celebrated Akitu, commemorating the cutting of barley in the spring. During this period of bounty, the Babylonians anointed a new king or symbolically renewed the power of the existing monarch.

Wepet Renpet means the opening of the year. Ancient Egyptians marked the occasion with feasts and revelry, much as we do today.

About 3,000 years ago, the Chinese marked the celebration of their New Year. The festival occurs to mark the coming of the Spring harvest and usually lasts fifteen days. It is one of the few ancient celebrations still celebrated in its original form and dates today.

Unlike many ancient celebrations, the Chinese New Year occurs based on a lunar calendar. Thus, the celebrations occur in January or February on the second full moon after the winter solstice.

Where Did January 1st Come From?

Before New Year’s took up residence on January 1st, the ancient Romans celebrated Janus, the god of change and new beginnings. Janus’ celebration evolved, originally occurring around the Spring Equinox. However, after Julius Caesar got his hands on the calendar, that date changed.

After Julius Caesar took over the Roman government, he implemented changes to the existing calendar to follow the Earth’s rotation around the sun. Caesar moved January and February to the front of the calendar and made January 1st the official start of the New Year.

This calendar grew to become the accepted measurement of time throughout most of the known world due to Rome’s conquering the land from Britain to the Middle East.

During the Medieval era, Christians sought to move New Year’s to align with Christ’s birthday. The change did not last very long.

In an attempt to correct the changes occurring in Medieval Europe, Pope Gregory XIII introduced the Gregorian calendar. His calendar kept January 1st as New Year’s and fixed a few inconsistencies in the Julian version. Most of the modern world still follows this calendar.

New Year’s Traditions Around the World

Every country and culture celebrates New Year’s with unique traditions and customs. Many of these customs have ancient roots, while others have grown out of the modern age.

Many New Year’s traditions occur in cultures across the globe.

In many cultures, circular foods like cookies, oranges, and cakes signify the closing of the old year and the beginning of a new one. Likewise, long-shaped foods like noodles signify longevity and good health.

In many cultures, the first person to walk through the door after the last stroke of midnight on New Year’s can bring good luck to the house. Old European tradition states the person should have dark hair and bring coal, salt, and other household items to bless the home.

Rebirth with Toasts and Resolutions

Around the world, cultures traditionally toast the New Year with blessings of good fortune and luck. Likewise, the tradition of resolutions symbolizes a step towards new beginnings. These traditions harken back to the ancient practices celebrating rebirth and renewal.

The Kiss At Midnight

Many countries mark the New Year by sharing a kiss with someone you love. The tradition itself likely has Germanic origins. In old German tradition, greeting the New Year with a kiss ensured a year of affection.

The lyrics of Auld Lang Syne originate from an 18th Century poem by Scottish poet Robert Burns. It likely came to America and England by the Scottish people and was popularized by Guy Lombardo’s New Year’s Eve concerts in New York City.

Millions of Americans tune in to watch the New Year’s Eve Ball Drop in Times Square every year. The tradition began in 1907 with a ball weighing 700 lbs. Today’s ball, made of Waterford Crystal, weighs 1,212 pounds and shines with over 9,000 LED lights.

The Southern part of the U.S. enjoys a traditional dish of black-eyed peas, rice, and meat on New Year’s. The tradition dates back to the 19th century.

Many communities in the U.S. celebrate New Year’s by commemorating Watch Night, which marks the anniversary of the Emancipation Proclamation signed on December 31, 1862. To mark the signing’s anniversary, many churches hold special services in honor of Watch Night.

Walking The Suitcase Around the Block

A popular tradition of Latin Americans desiring a year full of travel and adventure is packing a suitcase and walking it around the block on New Year’s Eve.

Many Latin American cultures practice ritual house cleaning on New Year’s to usher in good luck and send the old, bad luck of last year out the door.

In France, it’s tradition to kiss under the mistletoe on New Year’s. Also, the French believe the weather on New Year’s indicates how the rest of the year will go.

In Greece, children sing the kalanta, or carols, to mark the New Year. The Greeks also celebrate Kali Hera, or good hands, by giving out money and gifts to bless the year with prosperity.

In China, the New Year commemorates a battle against a monster called a Nian. Loud noises and the color red fend off the monster and provide good luck. Thus, fireworks and red lanterns fill the Chinese New Year.

In Vietnam, peach blossoms are the flower of the Lunar New Year. It is tradition to give peach trees as gifts during the New Year celebrations.

In Thailand, the New Year begins with a massive water fight. The Songkran celebration occurs across the entire country, celebrating new beginnings and washing away the old.

No matter when you celebrate New Year’s, remember that it’s all about a fresh start. So take the time to celebrate the year that has passed, and prepare yourself to leap into the New Year with gusto. Happy New Year!