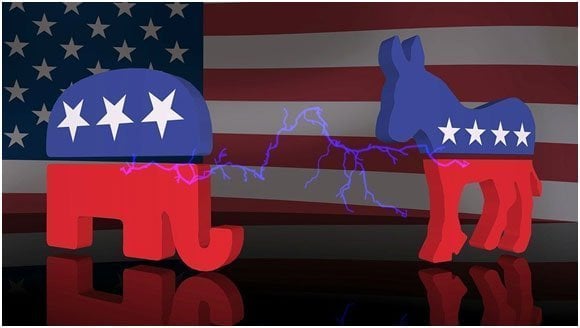 In 21st century America, political conversations and activities tend to cause disagreements that are sometimes heated – and often unpleasant. When these disputes happen in the workplace, it may not only make employees feel uncomfortable, but it may also make them feel unsafe. If left unaddressed, they may result in further disruption and damage morale. So the question for HR professionals is, how to address political activity and speech without infringing on anyone’s rights.

In this political climate, many employers have concerns about their ability to take disciplinary action against or fire an employee who:

Unfortunately there is no definitive answer in any of these scenarios. This is because political party affiliation and political speech aren’t typically afforded the same constitutional safeguards as gender, race, color, age, national origin and other protected classes. Some safeguards for freedom of speech do exist in this context, however.

This means the actions you can take as an employer depend on several factors, including:

Employees may mistakenly believe that they have a “right to free speech” in private-sector workplaces under the U.S. Constitution. This is because, as a former supreme court justice once put it: you may have a constitutional right to discuss politics, but the constitution does not provide any guarantees about employment.

In this context, you should be aware that the First Amendment doesn’t necessarily allow for political speech in the workplace. In most cases employers are legally allowed to control expression in the workplace. Therefore, anyone who engages in political activities or conversations that cause disruptions may be disciplined or even fired.

Depending on where they work, state laws may provide some protection to employees that engage in political activities or discussions on the job. Specifically, they may be exempt from discipline and termination, based on their right to free speech. Even so, there are several documented cases in which this was not so. For instance:

Implications for Workplace Practices and Policies

As we have already noted, political discussions and activities at work can cause numerous headaches for HR. Because they are a potential source of conflict, they can affect individual and group dynamics. The use of company email to convey political messages may lead to subjective use of certain personnel policies. Divisive material posted or left in plain view – even in individual work spaces – may also be controversial and disruptive. Finally, these activities can also affect productivity, especially if one or more employees request time off to support of a candidate or political party.

Depending on its nature political speech or activity may be in direct conflict with standing workplace rules such as:

Depending on the circumstances, political speech and/or activities may also violate rules prohibiting discrimination and harassment, and company rules pertaining to civility and disparagement. Additionally, they may prompt concerns about whistleblowing and retaliation.

Employers and employees should also be aware that workplace conversations about especially controversial topics could even result in legal action. For example, discussions about gender, gender identity or sexual preference could lead to sexual harassment allegations, and debates about someone’s ethnicity might lead to serious concerns regarding discrimination.

Given the potential ramifications of political speech activities in the workplace, employers are encouraged to seek advice from qualified legal professionals. In the meantime, here are some general considerations.

To determine whether a government worker’s speech is protected, the employer weighs: 1) the employee’s rights and privileges as a citizen against 2) the state’s concerns about promoting effective public services through its staff. In this milieu, relevant factors for public employers include:

Even though the First Amendment prohibits the creation of laws “abridging the freedom of speech,” governments can nevertheless restrict speech in certain circumstances.

The following cases illustrate these points. For example, the 2006 case Garcetti v. Ceballos, featured a prosecutor who was not promoted after penning a controversial memorandum. This particular memorandum challenged the accuracy of a search warrant that was important to the government. In a 5-4 decision, the U.S. Supreme Court ruled that protections from employer discipline afforded by the First Amendment do not apply to public employees making statements pursuant to their official duties. In particular, the Court opined, an employee speaking in his or her official capacity is not speaking as a private citizen for First Amendment purposes.

Cox v. NH affirmed that the states have the ability to restrict free speech. In this matter, authorities arrested a large group of Jehovah’s Witnesses who participated in an information march without a permit, as required by state statute. The U.S. Supreme Court held that governments could create “time, place and manner” restrictions without violating constitutional rights. In this case, the Court ruled, the First Amendment’s protection didn’t apply to the way in which the group expressed itself – in a parade and without the necessary permit.

Finally, in Chaplinsky v. New Hampshire, Walter Chaplinsky was preaching on a street corner and got arrested after directing abusive and aggressive language towards a police officer. Here, the Court ruled that it is constitutional to prevent or punish certain types of speech, including “fighting” words such as those used by Chaplinsky.

As we have previously noted, however, states often create as well as restrict protections for speech and expression. Consider New Hampshire, where government workers can legally discuss government entities and policies without interference. Public-sector employees may seek an injunction or damages if their right to do so is violated.

As we have also detailed above, the First Amendment doesn’t apply to employees in private sector businesses when it comes to political expression on the job. Having said that, there are some state and local laws that protect them from discipline or termination because of their political speech or activities outside of the workplace.

Then there is the NLRA. It allows union and nonunion employees to help one another by sharing information, signing petitions, and engaging in similar activities to better working conditions. While the NLRA doesn’t specifically pertain to political speech, speech and related activities are protected if: they are concerted and are related to a work issue. Because the extent of these safeguards varies from one state to another, it is important that employers and employees consult a lawyer with relevant experience before initiating any legal action.

The best way to avoid unnecessary workplace headaches in today’s political climate is to create a comprehensive policy regarding political speech and activities. It is also important to articulate the reasoning behind it. Be sure to speak with a qualified lawyer before implementing any rules that could potentially run afoul of state or federal laws.

Once you have done that, be sure to provide applicable training for supervisors and management. Ideally they should have no doubt about how to address inappropriate conduct and refrain from engaging in it themselves.

Finally, any employee complaints of harassment should be promptly thoroughly investigated. Do not be afraid to seek legal advice if necessary.