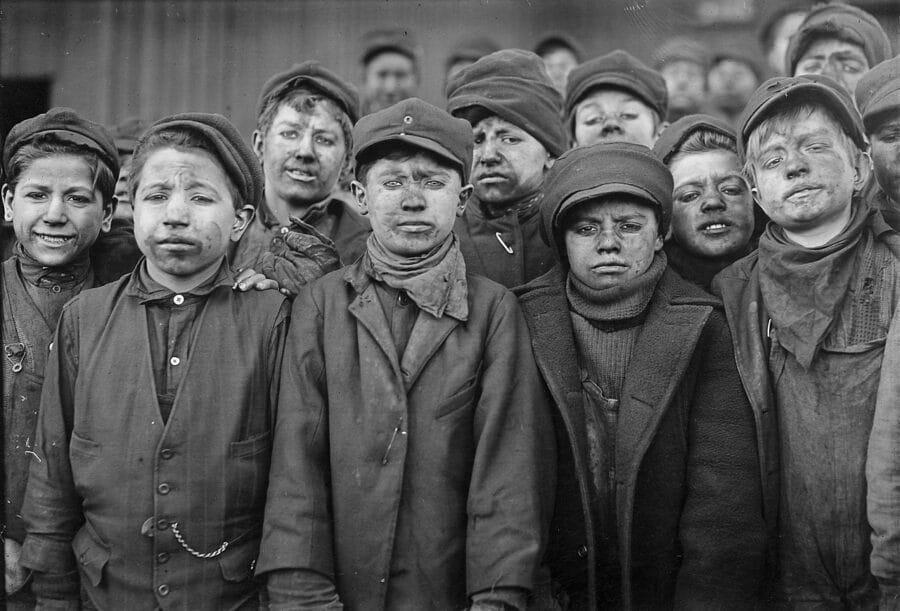 A huge part of growing up in the United States is getting your first job. Most of us, often in our teen years, get a job at the mall or a store to help us pay for school supplies, bills, and maybe a few things that we would like. There’s usually a distinction, however, between one’s pre-work childhood and your post-work adolescence. That wasn’t always the case in the United States, as is common knowledge. However, child labor hasn’t actually left the country. In order to understand why this was, one needs to look at the history of child labor in the United States.

Child labor isn’t a uniquely American phenomenon. Most anthropologists agree that child labor has existed across multiple cultures. In the 16th century, England used public money to hire children to work. At the time, the English were concerned about the children developing a proper work ethic as laziness was seen as a societal problem that could undermine the moral fabric of the nation.

Child Labor in the Colonial Era

Similar attitudes were brought over to the 13 colonies before the Revolutionary War. Orphans were sent to either apprentice in a trade or do domestic work once they turned 13. In fact, only children of very wealthy merchants and plantation owners were not expected to prepare for some time of employment.

However, the goal of this work shifted to the new world. The colonists tended to be more focused on maximizing profits than curbing laziness. The extra money was seen as necessary as England and the colonies drew closer to war. A mother and child hired by a manufacturer allowed two streams of income while the father could work on the family farm providing the third.

This arrangement was broadly supported by the public. The addition of child labor fit in with several of the founding fathers’ visions for the emerging country. Secretary of the Treasury, Alexander Hamilton noted in 1791 that kids who might “otherwise be idle,” could help bolster the manufacturing sector. An article that was written in the colonial-era national news magazine, The Niles’ Register, also supported child labor. In the article, it was argued that factory work was not suited for grown men. The writer argued that “little girls from six to twelve years old” were best suited for the work. In 1820, children made up more than 40% of mill workers in at least three of the New England States. A separate article in the Register argued that if a mill hired 200 kids from the ages of 7 to 16 could add $13,5000 of value annually to the town.

Industrialization and the End of The Civil War

Even organizations designed to help children supported child labor. The Charles Loring Brace Children’s Aid Society (hereto referred to as CAS) provided housing for orphaned boys in the 19th century and believed the best way to help kids out of poverty was for them to find an “honest trade.” It also emphasized that they would treat the children as independent dealers and help them find work for payment. The CAS helped train children in things like shoemaking sewing, and other trades.

Despite being ubiquitous in the manufacturing sector, there was nationally a relatively low number of children employed at the time. This was due to the limited manufacturing capabilities in the United States before the civil war. However, things became considerably more complicated with the influx of formerly enslaved and immigrant children coming into the picture. Similar to their parents in the sharecropping system, many recently freed children were functionally re-enslaved through apprentice agreements. The parents agreed to let their children work for former slave masters in exchange for “training.”

Reconstruction-era legislation eventually addressed the issue in the South but a similar problem persisted in the North. Italian children in New York City frequently fell prey to the “padrone” system in the 1870s. Padroni secured employment opportunities for immigrants that were called apprenticeship but looked a lot like child slavery in practice. The Padrone would get parents and children to sign apprentice agreements in Italy and then brought the kids to the United States. Once there, the Padroni often controlled the children’s wages, food supply, and contracts. The kids were often kept in locked camps that had barbed wire fences and had armed guards. The children often worked long hours in jobs like street performers and were frequently beaten if they stepped out of line.

Contemporary sources reveal that Italian and Black children were not the only ones working at this time. The practice carried through the turn of the century. The 1870 census revealed that 1 out of every 8 children in the county was employed. That number increased to 1 in 5 by 1900. Between 1890-1910 at least 18% of children 10-15 years old were working.  Children from poorer families were far more likely to be employed.

As the century changed, so did the types of jobs children were employed in. Boys in more rural areas often took to working in mines. They frequently worked as trappers, breakers, or helpers. Trappers opened wooden doors in the mines to let coal cars through, breakers separated slate and other things from coal, and helpers often assisted older miners in various roles.

Boys in urban areas were frequently hired to shine shoes, carry messages, and sell newspapers. The children could find themselves running messages for anyone from a banker to an office worker or even a brothel worker. Newspaper boys were some of the most well-known child laborers. This was, in part, because of some of the unscrupulous tactics they would use. The boys were instructed to sell as many newspapers as possible and received part of the profits at the end of the day. Some would make up spectacular, but false headlines to sell papers. Others would pretend to need to sell one final paper to go home and prey on the buyer’s sympathy. After the paper was sold, they would tell the next potential buyer a similar story.

Girls were also put to work at this time. They tended to appear more frequently in cotton mills. While planters tended to get their workers from the rural Black population, these cotton manufacturers tended to enlist the help of poor white families. The mill owners argued that hiring these families was an act of altruism to help them out of poverty. However, most historians agree that there was a decided benefit to hiring a man or woman and allowing them to keep an eye on their child by hiring them as well. Girls frequently spun wool in these mills while adults and boys worked at various other needs.

The farm became one of the last bastions of well-known child labor. In 1900, 6 out of 10 male farmhands were simply the farmer’s sons. These children could be as young as three years old. A survey from 1910 in New Jersey found that most cranberry pickers were between 8-10 years old. A larger surgery found that a quarter of those working in agriculture under 16 was actually under 10 years old.

Before landmark legislation was passed in the 1930s, children were seen as the property of their parents. Several court cases involving the death of children ended with the parents being awarded the lost wages they would have made until the child became a legal adult. A relatively small but vocal minority spoke out against this until the Fair Labor Standards Act in 1938 made the minimum age of employment to 16 or 17 years old

Child labor has been drastically limited but it still happens in sectors like agriculture. Human Rights Watch outlined the problem as recently as 2011. The infamous so-called sweatshops of the garment industry also employed many of the children of illegal immigrants to keep wages low. Laws vary state by state, but there are now legal measures designed to protect children from workplace exploitation.